Skip to content
The quality of a liquid crystal display first depends on its panel, because the quality of the panel directly affects the viewing effect of the screen, and the LCD TV panel accounts for more than half of the overall cost, which is the main factor affecting the cost of LCD TVs, so To choose a good LCD monitor, first select its panel. The liquid crystal panel can largely determine the brightness, contrast, color, viewing angle and other very important parameters of the liquid crystal display. The development speed of the LCD panel is very fast. From the three generations of previous years, it quickly developed to the fourth and fifth generations, and then it skipped six generations to reach seven generations. The updated eighth generation panel is also being planned. The current manufacturers of LCD panels are mainly Samsung, LG-Philips, AUO, etc. Due to differences in technical levels, the production of LCD panels is also roughly divided into different types of models. Common VA panels such as TN panels, MVA, and PVA, IPS panels, and CPA panels.

1. The TN panel TN is called the Twisted Nematic panel. The low production cost makes the TN the most widely used entry-level LCD panel. It is widely used in mainstream low-end liquid crystal displays currently on the market. Currently we see that the TN panels are mostly modified TN+film. The film is the compensation film. It is used to compensate for the lack of viewing angle of the TN panel. At present, the viewing angle of the improved TN panel is up to 160 degrees. Of course, this is the manufacturer's contrast ratio. With a 10:1 measured limit, the image has actually been distorted or even discolored when the contrast drops to 100:1.

As a 6Bit panel, the TN panel can only display 64 colors of red/green/blue, and the maximum actual color is only 262.144 kinds. Through the â€œditheringâ€ technology, it can obtain performance capacity of more than 16 million colors, and can only display 0 to 252 gray three primary colors, so the final color display number information is 16.2 M color, rather than what we usually call true color 16.7M color; plus TN panel to improve the contrast is more difficult, the problem is directly exposed color Thin, poor restore ability, the transition is not natural.

The advantage of the TN panel is that due to the small number of gray levels in the output, the deflection speed of the liquid crystal molecules is fast, and the response time is easy to increase. Currently, the TN panel is basically used in liquid crystal products below 8 ms on the market. In addition, Samsung has also developed a B-TN (Best-TN) panel, which is actually an improved type of TN panel. It mainly aims to balance the TN panel's high-speed response and must sacrifice the quality of the contradiction. At the same time, the contrast ratio can reach 700:1, and it can already be close to the panel of MVA or early PVA. Taiwan's many panel makers produce TN panels. The TN panel is a soft screen, and a similar pattern of water marks can be seen by gently drawing with a hand.

The VA type panel is now a type of panel for high-end liquid crystal applications and belongs to a wide viewing angle panel. Compared with the TN panel, the 8bit panel can provide 16.7M color and large viewing angle is the high-end capital of this kind of panel positioning, but the price is also more expensive than the TN panel. VA class panels can be further divided into MVA panels dominated by Fujitsu and PVA panels developed by Samsung, the latter being the inheritance and improvement of the former. The VA class faceplate has the highest contrast (front view), but the uniformity of the screen is not good enough, and color drift tends to occur. The sharp text is its killer and its black and white contrast is quite high.

Fujitsu's MVA technology (Multi-domain Vertical Alignment) can be said to have emerged as the first widely-viewed LCD panel technology. This type of panel can provide a larger viewing angle, usually up to 170Â°. Through technology licensing, panel companies in Chinaâ€™s Taiwan Provinceâ€™s Chi Mei Optoelectronics and AUO have adopted this panel technology. The improved viewing angle of the P-MVA panel can reach a nearly horizontal 178Â° and the gray-scale response time can reach 8ms. Samsung's PVA (Patterned Vertical Alignment) technology also belongs to the VA technology category. It is an MVA technology. Successors and developers. Its comprehensive quality has already surpassed the latter, and the improved S-PVA has been able to keep pace with the P-MVA, gaining an extremely wide viewing angle and faster and faster response time. PVA uses a transparent ITO electrode instead of the protrusions of the liquid crystal layer in the MVA, and the transparent electrode can obtain a better aperture ratio and minimize the waste of the backlight source. This mode has greatly reduced the possibility of "bright spots" in the LCD panel. The status in the era of LCD TVs is equivalent to the "fighting" in the era of the CRT TV. Samsung's PVA-mode wide-view technology has been widely adopted by Japanese and American manufacturers due to its strong production capacity and stable quality control system. Currently PVA technology is widely used in high-end liquid crystal displays or LCD TVs. The VA panel also belongs to the soft screen, and a similar water mark will appear when you touch it with your hand.

IPS (In-Plane Switching, plane conversion) technology is a liquid crystal panel technology introduced by Hitachi in 2001, commonly known as "Super TFT". IPS camp led by Hitachi, gathered a group of manufacturers such as LG Philips, HannStar Crystal, IDTech (Chi Mei Optoelectronics and Japan's IBM joint venture), but in the market can see a lot of models. The biggest feature of the IPS panel is that its two poles are on the same plane, unlike the other liquid crystal mode electrodes on the top and bottom, three-dimensional arrangement. Since the electrodes are on the same plane, the liquid crystal molecules are always parallel to the screen regardless of the state, which will reduce the aperture ratio and reduce the light transmittance. Therefore, the IPS application on the LCD TV may require more backlights. There is also an improved S-IPS panel that belongs to IPS.

The advantage of the IPS panel is its high viewing angle, fast response, accurate color reproduction, and low price. However, the disadvantage is that the light leakage problem is relatively serious, and the purity of the black is not enough, which is slightly inferior to PVA. Therefore, it is necessary to rely on the compensation of the optical film to achieve better black color. The current IPS panel is mainly produced by LG-Philips. Compared with other types of panels, the screen of the IPS panel is relatively "hard." If you scratch it by hand, it is not easy to appear water-like deformation, so it has a hard screen. When you look at the screen carefully, if you see the fish scale-like pixels pointing to the left, plus a hard screen, then you can determine the IPS panel.

In addition, there are some other manufacturers also have their own LCD panel technology, such as NEC ExtraView technology, Panasonic OCB technology, modern FFS technology, these technologies are all improvements to the old TFT panel, providing the viewing angle and response time It is usually used only on its own brand LCD or LCD TVs. In fact, these panels belong to the TFT class panel, but now all kinds of panels have their own technology and name, so the name of the TFT is not often used.

Led Tube is also called LED light pipe, Led Fluorescent Tube, LED fluorescent lamp. The light source use LED as a light body. In general market, T5 and T8 are common use kinds.  And 0.6M, 0.9M, 1.2M  is common use size.  The advantage of it is not produce noise, slow down the lights, no flicker, protect the eyes, versatility, long life, rich colors. 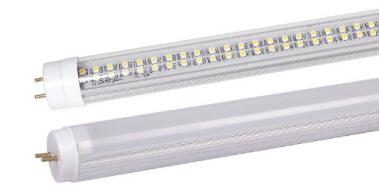